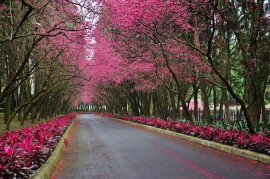 A long weekend, a break from school, or even a great stretch of weather inspires many of us to head out – to the beach or camping or even a road trip for an adventure. Sometimes the ride to these places can be a bit too long. Snacking and gazing out the window can only keep the kids busy for a short while. Very soon, the when-will-we-get-there whines start. At this time, a list of road-trip games can be a great way to keep everyone busy and entertained.

Being Muslim parents, we shouldn’t leave any opportunity to connect our children to Allah. This extra time spent together in the car can be a great chance to do just that and also have fun. Some of these ideas can also be used for the ride to and back from school or while running errands!

Everything that we see in this world is made by Allah. Even the things that are “man-made” are made from the materials that Allah has placed on earth. A chair is made of wood which comes from a tree which Allah has made!

In this game, the first player points out to any man-made creation. The other players take turns to trace the materials these things are made of right back to Allah. Objects to use for this game can also be products you can see on billboards, snacks being eaten, objects on the road, etc.

2. I am grateful to Allah for…

This is a fun memory game. The first player says “I am grateful to Allah for…” and mentions any object such as “my eyes”. The second player has to repeat “I am grateful to Allah for my eyes and…”, and add to the sentence with a word which begins with the last letter of the word before. In this example, since “eyes” ends with an ‘s’, the player could say ‘shoes’. Each player has to repeat the entire phrase and add a new word. Whenever someone forgets or gets the sequence wrong, start again.

This game is similar to “I spy” but uses all the wonderful five senses Allah has given us to explore the world around us. On their turn, each player can choose which sense they want to explore with, and give one or two clues using that sense:

Allah gave me a hand to feel and I feel a …. (soft fluffy thing)

These don’t have to be objects that are actually around. Children describe the object they are thinking of with that particular sense, and the other players guess what it is. The one who guesses correctly gets to take the next turn.

Children have to spot things on the road or around in the alphabetical order of the Surahs. So the first thing they have to spot is with F (since Surah Al-Fatiha is the first surah). The next would be B (Baqarah), then A (Aal Imran) and so on. Another way to play this can be to spot the letter itself on road signs, billboards, shop names — any reading material outside the window qualifies. Rules can also be put in such as spotting the alphabet/ object on your own side of the car.

The Prophet (sa) instructed us to say Allahu Akbar whenever ascending and Subhan Allah whenever descending from any place. Whoever calls out Allahu Akbar or Subhan Allah first, when ascending or descending during the road trip is given one point. The person with the most points on reaching the destination gets a reward such as getting to choose his bed first or deciding where to eat lunch. This game can be extended to whoever calls out the dua for travelling after a stop, says Bismillah before eating, etc.

Share it, Retweet it, Pin it – the Islamic WayEight Alternatives to the Screens