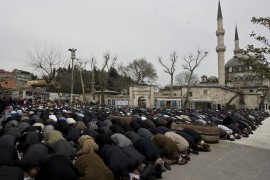 Travelling down memory lane, I still have a vivid recollection of the time, when almost a decade ago, my father bought home two tiny adorable goats, about two months before Eid ul Adha.

My sister and I were overwhelmed to see such delightful and sweet little animals., With sparkling blue eyes and button nose on a cute little face and covered with black and white fur, they looked as adorable as anything. Being very fond of animals, I became good friends with those goats within no time. I played with them, fed them, took them for walks, and soon, they started recognizing me. Whenever I’d come home from school, as soon as I entered the gate, they’d start calling me in their voice, and I would rush towards them, and play with them all day long.

Time passed quickly, and soon enough came the Eid days. The entire time that I had spent with them, the thought had never occurred to me that these were sacrificial animals, and were brought to be sacrificed. But now I had to face the reality and I was, in no way, ready for it. I tried to convince my parents to let me keep these animals, and get some other animals for sacrifice. I cried buckets of tears, and pleaded as much as I could, but they wouldn’t listen. I was explained that it is Allah (swt) Who has given us this order, and it is done to attain His blessings. But at that time, all I could think of were my innocent little pets. I couldn’t afford to lose them. Eid preparations, which are usually very exciting – with dresses, bangles, mehndi (henna), shoes, jewellery – felt useless now. Nothing could save my very dear friends. All I could think of was why Allah (swt) has given this order. He has ordered us to always be kind to animals. Then why does He ask us to sacrifice these animals? My mind was flooded with confusing questions.

Finally came the Eid day, and what I had feared happened. I saw the butcher arriving, and then through the window, with watery eyes and a heavy heart, I saw those adorable little creatures being sacrificed.

Now that it has been almost a decade since that sacrifice, I finally understand the essence and the actual purpose of sacrifice. The sacrifice that my sister and I made was true in spirit because those goats were really dear and precious to us; we sacrificed something really beloved and close to our hearts in order to follow Allah’s order.

The essence of Eid ul Adha is to sacrifice something close to our hearts because it is supposed to signify our readiness to give away something dear to us, in order to follow Allah’s commands and submit completely to Him.

Now for a moment, let’s just take a look at the sacrifices that we make every year on Eid ul Adha! In most of the homes, the animal comes hardly a day or two before the Eid day. Some don’t even bother to glance at the animal to be sacrificed. When we don’t spend even a little time with the animal, we can’t get close or attached to it. It is not beloved to us or close to our heart. Yet it is Allah’s mercy that He accepts this sacrifice from us.

Yes, regardless of whether or not the animal to be sacrificed was close to us, the correct Islamic belief (‘aqeedah) is that it is acceptable to Allah. The Eid ul Adha sacrifice is a symbolic sacrifice which shows our willingness to let go of something/someone dear to our hearts for Allah’s sake.

By ordering us to sacrifice an animal on Eid ul Adha, Allah (swt) doesn’t necessarily want us to give up something dear to us; rather He wants us to be ‘ready’ to give up something dear to us for His sake. The sacrifice is symbolic, and it symbolizes our willingness to give up things that are of benefit to us or close to our hearts, in order to follow Allah’s commands. This offering is the essence of Islam because the meaning of Islam is that one should surrender to Allah (swt), and submit one’s most prized possession.

The fact that it is acceptable to sacrifice an animal without it being a beloved pet first is very rational, since many people can’t afford to keep animals in their house or compound for a long time, and in some areas or apartment blocks, one isn’t even allowed to keep a sheep in one’s yard let alone slaughter it! Also, some people are never able to see the animal that will be slaughtered (for instance, on hajj).

When Ismail (as) was about thirteen, Allah (swt) decided to test their faith and submission to Him. Both father and son were put through the most difficult test of their love for Allah. Ibrahim (as) dreamt that he was sacrificing Ismail. An unimaginable act: sacrificing the son he begot after so much Du`aa (supplications), the only one he had, and the one who had been the center of his affection and love for all these years. Ibrahim (as) knew that the dreams of the prophets were inspired by Allah (swt). They were one of the ways Allah communicated with his prophets. This must be what Allah wanted him to do. When the intent of the dream became clear to him, Ibrahim willingly surrendered to the perceived commandment.

Ibrahim presented the matter to his son, and asked for his opinion. Ismail’s reaction was absolutely astounding. He did not show any hesitation or reservation even for a moment. He said, “Father, proceed to do what you have been commanded. You will find me, Insha Allah (Allah willing), very patient.” His mature response, his insight into the nature of his dad’s dreams, his willingness to sacrifice his life for the sake of Allah, and his commitment to Allah’s submission were all unparalleled.

But the loving Lord, Allah, Who is most merciful, and kind, didn’t want it this way. It was just a trial. The life of Prophet Ismail (as) was saved, and compensated with another sacrifice, the sacrifice of a sheep. Allah mentions in the Quran:

“And when he reached with him [the age of] exertion, he said, “O my son, indeed I have seen in a dream that I [must] sacrifice you, so see what you think.” He said, “O my father, do as you are commanded. You will find me, if Allah wills, of the steadfast. And when they had both submitted and he put him down upon his forehead We called to him, “O Ibrahim You have fulfilled the vision. Indeed, We thus reward the doers of good Indeed, this was the clear trial And We ransomed him with a great sacrifice And We left for him [favorable mention] among later generations. “(Saaffaat 102-107)

Therefore when we offer our life symbolically to the Almighty by offering the sacrifice of an animal, we express our gratitude on the guidance of submission which was expressed by Ibrahim by sacrificing his only son. A Muslim must submit to Allah in any circumstances, and love for Allah should be over and above any other love in the life of a Muslim.

By making a sacrifice in the true essence by giving something beloved to us, we also learn the true act of sacrifice for our everyday life. This teaches each of us to make small sacrifices, giving up things that are fun or important to us; it helps us to sacrifice our favorite TV program in order to offer prayer, or sacrifice a visit to the market in order to recite the Quran, or sacrifice an outing with friends in order to listen to some beneficial Islamic lecture. Such sacrifices teach us how to give up our small worldly wishes to attain Allah’s blessings. They symbolize our willingness to give up things close to our hearts in order to follow Allah’s commands. A true Muslim is one who submits himself or herself completely to the Lord, and is willing to follow Allah’s commands completely and obediently. It is this strength of heart, purity in faith, and willing obedience that our Lord desires from us, and the sacrifice made on Eid helps us attain it.

Moreover, the sacrifice also teaches us sharing; meat from the sacrifice is mostly given away to others. One-third is eaten by immediate family and relatives, one-third is given away to friends, and one-third is donated to the poor. It symbolizes our willingness to give up some of our own bounties in order to strengthen ties of friendship, and help the less privileged ones. We recognize that all blessings come from Allah, and so we should open our hearts and share them with others.

Connecting our Children to the Qur’anFostering Patience through Childhood Part 1: Creative Techniques to Teach Patience to Kids