In the footsteps of Ibrahim (alayhi salam) – the Haneef 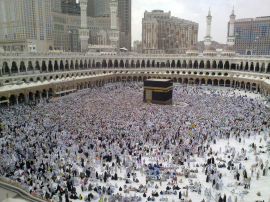 ‘My aim in life’ is a common essay topic that was likely to come in our matriculation exams. Hence our English teacher had asked us to prepare well for it. As I was writing down the typical ‘I want to become a doctor and help the suffering humanity’ lines, my mother came in.

“Is that really your aim in life?” she asked disapprovingly.

“Erm…no, that’s just what everyone writes.”

“Why don’t you write about your real purpose in life: to please Allah?” she suggested.

And later, while searching for my true purpose in life I discovered that ultimate success comes to those who always stay inclined towards Allah, in pursuit of His pleasure. It is to live a life of Hanifiyyah (monotheism), similar to that of Ibrahim (alayhi salam). Every other objective is defined and measured by this key goal of pleasing Allah.

Abu Sa’eed al-Khudree (ra) relates a hadith qudsi in which the Prophet (blessings and peace be upon him) said: “Allah, the Lord of Honour and Glory, will call the inmates of Paradise, ‘O Residents of Paradise!’ They will respond, ‘Here we are, our Lord, and all good is in Your Hands’ He will ask them: ‘Are you now pleased?’ They will answer: ‘Why should we not be pleased, our Lord? When You have bestowed upon us such bounties which You have not bestowed on any of Your other creation.’ He will then say to them: ‘Shall I not bestow upon you something even better than that?’  The inhabitants of Paradise will inquire: ‘What could be better than that?’  Allah will say: ‘I bestow upon you My Pleasure and shall never thereafter be displeased with you.’”(Bukhari and Muslim)

And this shall be the happiest day for the believers in Paradise!

Allah (swt) has also defined the ultimate success in the Quran: “But the greatest bliss is the Good Pleasure of Allah. That is the supreme success.” (Surah at-Tawbah 9: 72)

Each year the days of Hajj and Eid ul-Adha come to remind us of the legacy of Ibrahim (alayhi salam) – the haneef (monotheist). Allah (swt) has described this as his special quality in several places in the Quran. He says:

“Indeed, Abraham was a [comprehensive] leader, devoutly obedient to Allah, inclining toward truth, and he was not of those who associate others with Allah.” (Surah an-Nahl 16: 120)

The Arabic word haneef literally means ‘to incline or decline’. The term as used in the Quran refers to a person who turns away from associating partners with Allah and is inclined only towards Him and the true religion (Ibn Kathir). He disassociates from every belief, desire, action and step that is disliked by Allah and races towards deeds that are beloved to Him.

Picture yourself with a compass. Wherever you go, in whichever manner you move, the compass needle will always point towards the same direction. This is a depiction of the term ‘haneef’.  Whatever situation a believer is placed in, and in every phase of life his primary concern is Allah.

Ibrahim (alayhi salam) made such sacrifices for Allah that even the thought of them is enough to make us shudder. He went against his own family and tribe thus placing a knife over his comfortable life, accepted being thrown into the fire, departed his hometown, left his dear wife and only son born after years of waiting in a barren valley with no visible support, and later was even ready to slaughter him. Ibrahim (alayhi salam) laid down everything for the sake of Allah, because He was dearer to him than everything else.

Hanifiyyah is a lifestyle. A believer is not just haneef in the masjid. He is and should be a haneef in every sphere and stage of life; on his wedding day, in the sports club, in the office, on the phone, in college life, etc.  All his desires, choices and decisions are governed by the love of Allah. Although in doing so, most often –  if not always – it may require going against the heart and its longings. At times the love of Allah also demands sacrificing wealth and energy. This is the lesson we learn from Ibrahim (alayhi salam) – to submit willfully and to sacrifice when needed.

For example, when choosing a career, our foremost concern should be to pursue a field through which one can please Allah and earn Halal. Similarly, when choosing a spouse priority should be given to piety as the deciding factor. During celebrations and while selecting an outfit to wear, one must be careful about not imitating the non-believers. When having fun we should engage only in permissible and healthy means of entertainment.

In the upcoming days of Dhul Hijjah let us make an oath to ourselves to adopt the lifestyle of Ibrahim (alayhi salam). Like the needle of a compass, let us keep turning towards Allah; keep the supreme success in mind and strive to seek His face, however high the price.

Allah (swt) has instructed Muhammad (blessings and peace be upon him) and the believers in the Quran:

Say, “Indeed, my prayer, my rites of sacrifice, my living and my dying are for Allah, Lord of the worlds. No partner has He. And this I have been commanded, and I am the first [among you] of the Muslims.” (Surah al-An’aam 6: 162-163)

Educating Your Child About Hajj3 Things Cause Destruction & 3 Cause Salvation