Instilling the Love of the Mosque in Our Sons 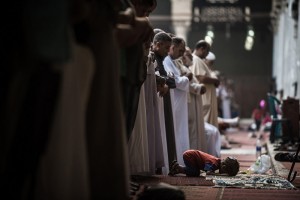 A young mother, instead of awarding her toddler with a star, would draw a mini mosque or minaret on his hands. This developed a positive feeling for the mosque in his heart, and whenever he noticed a mosque from afar, he shouted in his small voice: “Mosque! Salah!” A seedling of love was thus sown.

A mosque has a central place in the lives of Muslims; it is the house of Allah and Allah is the centre around Whom our lives revolve. A mosque is enlivened by His remembrance.

“[Such niches are] in mosques which Allah has ordered to be raised and that His name be mentioned therein; exalting Him within them in the morning and the evenings.” (Surah Nur 24: 36)

As parents, it is our responsibility to provide our children with an Islamic environment. Ultimately, children may make their own choices, and they may not necessarily follow the parents; however it is our responsibility to teach them and nurture faith in them in the best possible way. This is something we shall be held accountable for on the Day of Judgement. Moreover, parents do play a strong role in shaping the character and the likes/dislikes of their children.

A mosque is the best place in the sight of Allah, and as practicing Muslims, we all wish that our children attend the congregational prayer and visit the mosque regularly. Following are some tips to help connect our sons to the House of Allah (sons in particular because it is obligatory for men to pray in congregation, and it is better for women to pray at home).

Before expecting our kids to be regular in prayers, we must lay the foundation in their hearts; the love of Allah and the importance of His obedience. When there is a desire to please Allah and come near to Him, children will practice willingly. There will be no need for constant scolding and prayers will continue even in the absence of parents.

The establishment of this foundation starts from the day a child enters this world. Allah’s love is developed by discussing His bounties, His beautiful signs in nature, and His names and attributes. Children should also be taught about the importance of obeying Allah and His Messenger (sa) and the reward that comes with it. Teenagers increase in it by staying in the company of righteous friends. (A recommended read on this aspect is Nurturing Eeman in Children)

If there is an environment of visiting the mosque in the home, where the father and other male members are rushing to the mosque and spending time over there, children will automatically follow the lead. Fathers, this responsibility lies greatly on your shoulders. Your children must see you connected to the mosque.

When I opened some hadith books to the chapters about the virtues of visiting the mosque, I was amazed. The words of Prophet Muhammad (sa) contain enough encouragement. Read and discuss these together and a desire to become a recipient of these will upsurge in your sons and yourselves.

He also said: “He who purified himself in his house and walked to one of the houses of Allah for the sake of performing an obligatory act out of the obligatory acts enjoined by Allah, both his steps (would be significant) as one of them would obliterate his sin and the second one would raise his status. (Muslim)

Start from a young age

Start taking your kids to the mosque when they are young. Teach them how to behave in there and respect the place, but remember that children will be children. Be gentle with them and don’t be among those who ‘shoo’ them away, which sometimes has a far-reaching impression of negativity in their hearts regarding the place. If they are not welcomed in the beginning, it will be very hard to get the mosque into their hearts once they are older. Also, reward them for good behaviour using kind words and sometimes even a small treat.

In earlier times, the role of the mosque was not limited to prayers. They acted as a centre for socialization, learning the religion, reciting the Quran, meeting delegates, collecting charity, and making preparations for Jihad. This role of the mosque should be revived by organizing study circles, Quran circles, and programs for youth that are based in the mosque. Moreover, fathers and sons can set some exclusive time each week to spend in the mosque for instance, after Fajr or after Asr and engage in learning or dhikr.

One of the supplications that Prophet Ibrahim (as) made for his children was regarding the establishment of prayer. Make it for your children too. Dua (supplication) is, no doubt, the most effective tool.

“My Lord, make me an establisher of prayer, and [many] from my descendants. Our Lord, and accept my supplication.” (Surah Ibrahim 14: 40)

Naps, Snacks, and Sippy Cups: Gentleness When Dealing with Tweens and TeensTaking Out Me-Time As A Parent