The more trials you face, the more sins you reduce… 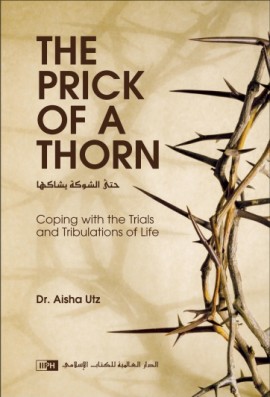 Another great book from the popular author of Nurturing Eemân in Children and Psychology from the Islamic Perspective:

The Prick of a Thorn by Dr Aisha Utz

The more trials you face, the more sins you reduce…

A Muslim female professional, whom I had met just after beginning a new position in the university, requested a private meeting with me. As we settled into her office, she began to share with me the story of her young daughter who had been suffering from a serious, potentially fatal medical condition for several years. She proceeded to describe the treatments, surgeries, and recurring visits to medical specialists, sometimes in other countries. As she related the details of her story, she burst into tears, and expressed intense feelings of guilt and grief related to the situation. She was plagued by nagging thoughts of being responsible for her daughter’s illness, and being punished by Allah for the misdeeds that she may have committed. She had also been suffering from some mild symptoms of depression, which were beginning to interfere with her ability to function normally at work and at home. Doctors had suggested another surgery for her daughter that could potentially be life-threatening, and she doubted whether she had the capacity to cope with the added stress of such an event.

I spent an hour, counselling her from an Islamic perspective, and providing her various explanations and coping mechanisms while also integrating Qurʼanic verses and hadiths (statements or actions of Prophet Muhammad [sa]) into the conversation as appropriate. The outcome of that hour-long session was truly amazing. Due to her level of faith, she readily responded to my suggestions, and took to heart what I had to say. While she primarily required some clarification, reminders, and redirection, the effect was profound. I spoke to her again, a week or so later, and she reported that she was functioning well. She thanked me for what I had done. I reminded her that all thanks belong to Allah who has provided us with these gifts.

While the process and the outcomes do not always come this easily, the lessons from this story are palpable. The issue is not really the tribulation itself; rather, what is important is our understanding of it, and the methods that we employ to deal with it. As a comprehensive approach to life, Islam offers all that we need to effectively cope with the difficulties that will inevitably come our way in life, encompassing cognitive, emotional, behavioural, and communal responses. The answers are already out there; we, as human beings, need to actively seek and utilize them. Unfortunately, it seems that Muslims, who have the answers in their very own hands, fail to recognize or take advantage of the intrinsic potential of Allahʼs guidance.

These experiences, along with the realization of the multitude and magnitude of tribulations faced by the human race in current times, led to the formulation of the ideas and the outline for this work. The general purpose of this book is to provide a framework for understanding the trials and the tribulations that we experience in this worldly life from the Islamic perspective as well as to present various solutions for responding to and coping with these tribulations. It is through the lens of Islam that we come to appreciate the wisdom, justice, and mercy that Allah has for His creatures, in the seemingly stormy and vast ocean of successive tribulations, and in an apparently chaotic and violent world. We will only be able to grasp the concept of Allahʼs qadr (His Divine will and predestination) with a realization that He has decreed every single event in our lives.

An excerpt from A Prick of a Thorn by Dr. Aisha Utz, soon to be released by IIPH.