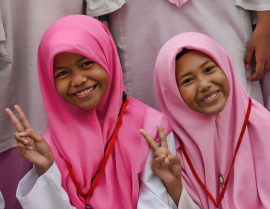 “Creche facility will be available on the premises,” claims the flyer to an Islamic lecture being held at a local five star hotel. “Separate room for mothers who will be attending with children under the age of 5.”

I sigh. Having a toddler means that I probably will not be able to attend any lecture by this Islamic organization, in the main lecture hall, for at least another 3 years. And that too, only if I am notblessed with another baby in the meantime.

It also means that all the children under the age of 5 whose parents are attending, will remain devoid of the blessings of the proximity of the physical company of the Islamic scholar, or da’ee (caller to Islam) who will be speaking at their events. Screens with live broadcasts can only replace a person so much.

For now, as a (rather controversially) unschooling mother, I can strive as much as possible to makemy own company as much a source of Islamic knowledge and inspiration for my children, as possible.

Because from my what I’ve seen through my 9-year personal experience of raising children, aside from schools, shopping malls, parks, and outlets of international fast food chains, children under the age of ten are not particularly welcome anywhere, especially where adults are doing serious work.

For years, ever since I’ve had children, I have been struggling to understand the secret behind the exemplary patience of Prophet Muhammad ﷺ, who readily allowed babies’ cries to shorten the obligatory prayers that he was leading in the masjid, out of concern for their mothers; who let a little child ride his back while he was prostrating during prayer for as long as the latter wished, and who showed not even a faint sign of displeasure when a baby urinated on his clothes!

How was he so patient?

Perhaps those times were different, I tell myself consolingly; the babies, toddlers and children were different. More mild-tempered. Less rowdy. Lower maintenance. The way people dwelled 1400 years ago, was also probably very different from now, because of which no “separate” creche arrangements were needed for children.

A small voice in my head, however, refuses to buy into my self-assuring hypothesis. I know that humans have anatomically been the same since centuries. They have given birth to and reared children since time immemorial. And the little children of every era have always been what we nowadays call: naughty, rowdy, spirited, and difficult to keep still in one place for too long.

Contemporary corporate, social, and academic systems have set in place strict demarcation of adult-only areas, which children are not allowed to enter because of the presence of clear, unspoken and unwritten boundaries. No one has officiated any rules or laws regarding this demarcation; it is just how modern society is structured to function.

“But children misbehave and cause disruptions!” is given as the reason.

It is true that those children who are used to being supervised and physically restricted to tightly “controlled”, children-only environments (a.k.a schools) since early childhood, which operate on these children’s adherence to strict rules imposed by their supervising adults, will tend to run amuck and wreak havoc once they are left on their own, in spaces where adults do their work.

However, we should stop to ponder upon an important point: what if we had allowed a baby to dwell in our adult-only spaces from the start? Would they still create disruptions in our adult-only systems and spaces as they grew older?

Or would they naturally adapt themselves to the adult environment they were growing up in?

Proof from the Sunnah: The Fruits of Prophetic Company

The young boys at the time of Prophet Muhammad, including his own grandsons, went on to become exemplary Muslims who achieved accolades in this world, in addition to ultimate success in the Hereafter. Names of such children that immediately come to mind, are: Anas bin Malik, `Abdullah ibn `Abbas, `Abdullah ibn `Umar, Usama bin Zaid, and Ali bin Abi Talib.

What was the secret of their success?

Well, for one thing, they were not denied access to the company of adults, most notably that of Prophet Muhammad.

While Prophet Muhammad allowed infants into his masjid and amiably tolerated their loud cries that emanated from the women’s area; and he conversed and played with toddlers, he also let older children sit in the company of him and his companions, and actually listened to what they had to contribute to the discussion.

The example of one such incident is given below, in which the son of `Umar ibn Al-Khattab, a young`Abdullah ibn `Umar, figured out the answer to a question of Islamic knowledge asked by the Prophet. A narration recorded in Sahih Al-Bukhari elaborates:

Narrated `Abdullah bin `Umar: “Once Allah’s Messenger (ﷺ) said, ‘Amongst the trees there is a tree, the leaves of which do not fall and is like a Muslim, tell me the name of that tree.’

Everybody started thinking about the trees of the desert areas and I thought of the date-palm tree but felt shy (to answer). The others asked, ‘O Allah’s Apostle! Inform us of it.’ He replied, ‘It is the date-palm tree.’

I told my father what had come to my mind and on that he said, ‘Had you said it, I would have preferred it to such and such a thing that I might possess’.”

Another narration about the same incident found in Sahih Al-Bukhari, adds these words of `Abdullah ibn `Umar, “….I thought that it was the date palm tree and intended to say, “It is the date-palm tree, O Allah’s Messenger (ﷺ)!” but I looked behind to see that I was the tenth and youngest of ten men present there, so I kept quiet.”

The important points to note from this incident, are:

We know that `Abdullah ibn `Umar eventually became one of the most righteous and notable companions of Prophet Muhammad, and a very learned Muslim as a man.

The question is: would he have done so, had he not been allowed to sit in the company of learned adults, particularly Prophet Muhammad?

At this point, I’d like to highlight the bright intellect of another young boy, the Prophet’s paternal cousin `Abdullah ibn `Abbas, who went on to become a notable scholar of tafsir (exegesis), eventually being known as “Tarjumaan Al-Qur’an”.

Ironically, `Umar ibn Al-Khattab was also responsible for encouraging him, as a young boy, to attend the gatherings of Prophet Muhammad, even against the wishes of some of the other men present there, as the quote below elaborates.

Tafsir Ibn Kathir  records, “Al-Bukhari recorded from Ibn `Abbas that he said, “Umar used to bring me into the gatherings with the old men of (the battle of) Badr. However, it was as if one of them felt something in himself (against my attending).

So `Umar replied, ‘Verily, he is among those whom you know.’

Then one day he called them and invited me to sit with them, and I do not think that he invited me to be among them that day except to show them.

So he said, ‘What do you say about Allah’s statement,  إِذَاجَآءَنَصْرُاللَّهِوَالْفَتْحُ﴾ ‏ ﴿    “When there comes the help of Allah and the Conquest.”  ‏[Qur’an, 110:1]

Some of them said, ‘We were commanded to praise Allah and seek His forgiveness when He helps us and gives us victory.’

Some of them remained silent and did not say anything. Then he (`Umar) said to me, ‘Is this what you say, O Ibn `Abbas?’

I said, ‘It was the end of the life of Allah’s Messenger that Allah was informing him of.’”

Is it not obvious from the above incident that, once again, `Umar had a key role to play in nurturing the innate talent for knowledge that `Abdullah ibn `Abbas possessed?

What I have observed from the actions of `Umar ibn Al-Khattab in the above two incidents, is his keenly observant eye that detected the potential among children. His intuition about their calibre was clearly remarkable, but he did not just stop at identifying their talents.

Rather, he encouraged and empowered these children to join the gatherings of adults at that time, which regularly benefited from Prophet Muhammad’s company and his discussions on knowledge.

And as for Prophet Muhammad, he was never known to turn an eager child away from himself. Ever.

Conclusion: We Have a Long Way to Go

In the current era, Muslim infants and toddlers are clearly disallowed from attending the main lecture-hall gatherings of Islamic knowledge, where the speakers deliver their address. These gatherings nowadays are usually very large, as compared to the smaller groups that the Prophet used to convene.

Nowadays, access to small, informal gatherings in the company of religious scholars is, in general, completely restricted for the masses, and more so for little children. Most masajid do not allow mothers with young children to attend congregational prayers, except in a separate area.

It seems that we mothers of infants and toddlers will have to make do with screens broadcasting the speakers’ address. We should, therefore, try to focus our full attention on training our children as diligently as possible in the realm of Islamic manners and etiquette.

Perhaps then, they will one day be invited to sit in the exclusive gatherings of the scholars of our time.

Until then, I am grateful for the presence of the crèche facilities and the screens, at the very least.

At least our little ones are still welcome — on the sidelines.

An Antidote for Grief‘Ramadan’ the Holiest