Animal Sacrifice in Islam: An Act of Worship, Not Cruelty 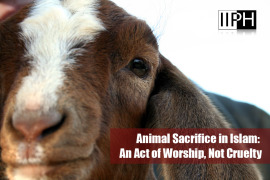 We live in an age in which humankind holds somewhat polarized views and attitudes regarding the treatment and consumption of animals.

On one end are the breeders, poachers, hunters, and other professionals employed by the pharmaceutical, fashion, entertainment, and food industries, who do not shy away from abusing animals in order to use them as a resource for monetary gains.

The methods they employ to capture, hunt, shelter/imprison, train, and also kill animals in order to use them or their hides, meat, feathers, fur, bones, and/or other body parts to earn money are not always merciful and kind.

For example, poaching rare, almost extinct tigers or bears to use their hides for making exorbitantly priced winter couture, and the animal testing carried out by companies that manufacture pharmaceutical and cosmetic products, which makes animals suffer physical harm, pain, mutilation, and even death.

The other extreme viewpoint regarding the ethical treatment of animals borders on treating them akin to human beings, or even better viz. never killing them (not even in a Divinely-prescribed manner), never using any of their body parts for human use, and treating them just like human beings by, for example, leaving them an inheritance after death.

Yes, this actually happens. Some people name their pets as heirs of their wealth!

Another example of over-rated ‘respect’ for animals is the way modern-day ‘vegans’ refuse to drink milk or even eat eggs, even though extraction of these edibles from animals doesn’t cause the latter any pain, ill health, or physical harm. Yet another example is the way pet dogs are given more love, care, and grooming among the elite social classes of some developed countries than the homeless and starving human beings suffering from extreme poverty in the developing countries.

These examples clearly show how kind treatment and respect for animals is sometimes taken a bit too far i.e. beyond the limits of moderation.

Islam is the only source of correct guidance that shows humankind the best, most moderate path to take in this polarized scenario regarding the treatment and use of animals.

The reason I am writing about this right now is because every year, as Eid Al-Adharolls around, many environmental welfare activists, including individuals dwelling in Muslim societies, feel disdainful towards the widespread animal sacrifice that they witness on a large scale.

Some Muslims I know, ‘escape’ from their (Muslim-majority) country of residence to go on foreign vacations during Eid Al-Adha holidays, in order to deliberately miss out on witnessing the ‘blood and gore’ of animal sacrifice that occurs on a mass scale, as practicing Muslims wholeheartedly enliven the sunnah of Prophet Ibrahim by slaughtering animals for the pleasure of Allah.

The reason, and Allah knows best, is their innate ‘disgust’ at the way they perceive this apparent ‘massacre’ of ‘innocent animals’. This is because – like modern-day ethically conscious animal rights activists and social welfare workers who do not prescribe to any particular religious ‘thought’, yet strongly advocate compassion and kindness towards all living beings – they consider the slaughter of an animal, in any way, to be an act of murder.

This is why it is very important for all Muslims who practice the sunnah of animal sacrifice every year on Eid Al-Adha, to publicly educate the masses about the fact that Islam condones the most moderate and correct take on the treatment and consumption of animals.

Else, it is possible that once Muslim children grow up and go out into an international society as adults, they too could get influenced by the well-intentioned but biased ‘animal rights’ approach, to the extent that they also start considering this kind of slaughter as – and I seek refuge with Allah as I write this – ‘barbaric’ and a form of unwarranted cruelty towards animals.

An Act of Worship Can Never Be An Act of Cruelty

Slaughtering an animal on the 10th of Dhul Hijjah is an act of worship that is mostpleasing to Allah on that day.

One of the realities regarding the life of this world, however, which makes it a great test for all of us, is that appearances can be extremely deceiving and misleading.

These benefits include consuming their milk (as a drink, and as cheeses, butter, yogurt, and all other dairy products derived therefrom), and using their hides to shield ourselves from the heat of the sun (i.e. by making tents or clothes) as well as using their wool and hairs.

This means that as long as humankind follows the correct way of slaughtering and hunting animals prescribed by the sunnah of Allah’s Messenger (sa), they are not sinning in the least by killing these animals, either to eat them, or to benefit from them in any other way, as a valuable resource (‘mataa’).

In the end, I’d like to stress how commendable the efforts are of all those ethically-conscious people who are campaigning for and advocating kind treatment of animals, especially within the realms of the Islamic methods of slaughter, hunting, fishing, breeding, and farming.

In reality, the ‘butcher’ who lays down on the ground his beloved animal that he has reared since infancy, and passes the razor-sharp knife across its throat, actually feels a greater pain in his heart (that of sacrifice for the sake of Allah), than the animal itself, which feels only the slightest sting as the blade slits its throat, and blood drains out.

Five Ways to Maximize Worship on the First 10 Days of Dhul-Hijjah
August 27, 2016