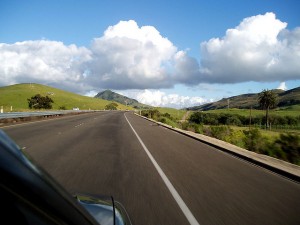 People in the United States spend a great deal of time driving. According to a recent study, drivers, on average, make two driving trips per day, averaging 46 minutes. We drive on average 29.2 miles per day or 10,658 miles annually. Some of us drive even more: truck drivers, taxi drivers, and similar professions immediately come to mind. But my 2004 van has nearly 233,000 miles on it, averaging over 20,000 a year. As a homeschooling mom, I am driving my and other people’s kids all over the place, and I know a lot of other moms who do the same. What do all these statistics represent to me? In one word—opportunity!

If you are going to spend a lot of time doing something, you might as well put it to good use. Driving presents the perfect opportunity for doing good deeds according to the Sunnah, as well as da’wah by example. For instance:

It is narrated on the authority of Anas b. Malik that the Prophet (may peace and blessings be upon him) observed:

“None amongst you believes (truly) until he loves for his brother” – or he said “for his neighbor” – “that which he loves for himself.” (Sahih Muslim)

So many opportunities here. Wouldn’t you want to get off your exit without someone speeding up to prevent you from doing so? Do you like being tailgated or screamed at for going the speed limit? It’s fairly simple—drive the way you want other people to drive around you.

Allah (swt) tells us in the Qur’an:

And let not those among you who are blessed with graces and wealth swear not to give (any sort of help) to their kinsmen, Al-Masakin (the poor), and those who left their homes for Allah’s Cause. Let them pardon and forgive. Do you not love that Allah should forgive you? And Allah is Oft-Forgiving, Most Merciful. (24:22)

We all make mistakes from time to time. We may cut someone off while driving, not seeing them in our blind spot; people occasionally slide into the other lane, and we may suddenly realize that we are about to miss our exit. If someone does something inconsiderate or even unsafe on the road, we should assume that it is was unintentional and, even if we know it is purposeful, forgive them and not retaliate, with the intention that we are doing so in hope that Allah (swt) will pardon and forgive us for our bad deeds.

And of course there is charity.

Abu Dharr narrated that the Messenger of Allah (sa) said:

Let that truck driver who is trying to get on the road in before you. Smile as you wave someone to go ahead of you. If it is safe, pull over and remove that old tire that is blocking the street from the road or return the neighbor’s trashcan to the sidewalk.

Allaah (swt) gives each of us, in whatever our circumstances, opportunities to do good. If you are a driver, don’t waste that opportunity—it’s easy and can actually save lives. Additionally, it is good da’wah.

Da’wah is a responsibility upon all sane, adult Muslims. There is overt da’wah and da’wah by example, which is applicable here. If you are recognizable as a Muslim, your courtesy on the road will not only reflect upon you, but upon Muslims in general. Even if you are not recognizable as a Muslim, your repeated kind and considerate acts while driving in your neighborhood is da’wah to those who know you in the neighborhood. And for passengers in your car, Muslim and non-Muslim alike, driving according to values found in the Sunnah is also da’wah.