Learning About the Jinn – Do’s and Don’ts 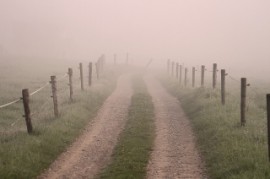 “What’s this nonsense?” a non-Muslim relative asks, reading the small sign in Arabic with an English translation hanging on the wall outside the hallway bathroom door:

In the name of Allah. O Allah! I seek refuge in you from the foul male and female devils.

I decide it’s a rhetorical question and don’t answer. Besides, I’m in another room and I could have easily not heard him. The truth is I don’t want to go down that path, begin that discussion about invisible beings with a devout atheist. He’s already thoroughly disgusted with my belief in a Divine Creator. Shaytan? Now, that’s a whole new level of crazy as far as he is concerned.

And I guess I can somewhat understand. When I first converted to Islam I didn’t believe in jinns either. I thought ‘jinns’ were a metaphor for the evil that persists in the world, something innate in humans that some people incline to and nourish, just the way others might incline towards good. After all, believing in jinns is not one of the six pillars of iman (faith). But it didn’t take long after my conversion to discover that when the Qur’an mentions ‘jinns’, it really means invisible beings, much like humans, living in a different world, complete with obligations, trials, and the journey to Allah (st).

Now, from a purely intellectual, newly convert standpoint, discovering that there is an unseen world around us, inhabited with a different created being, but one facing similar challenges, was utterly fascinating…and slightly terrifying. Do you mean to tell me that jinns occupy the same space as us? That they can see us, but we can’t see them, a situation that will be the reverse in Jannah? Jinns also follow the teachings of our beloved Prophet (sa)? Bad jinns encourage and tempt us to disobey Allah (st) and the good, practicing Muslim jinns leave us alone? I had to know more, but I soon realized that many of the sisters I questioned generally fell into one of two groups when it came to discussing jinns: they either didn’t want to talk about it at all or they got very excited about the conversation, wanting to discuss minute details of jinn-life, resulting in much speculation and turning a simple fact of existence into a titillating supernatural funfest. Like all things Islam, though, moderation is the key to learning about jinns (see al-Qur’an, Surah al-Hud, 11:112).

Jinns are mentioned in many places in the Qur’an and often with us, for example:

O you assembly of jinns and mankind! “Did not there come to you Messengers from amongst you, reciting unto you My Verses and warning you of the meeting of this Day of yours?” They will say: “We bear witness against ourselves.” It was the life of this world that deceived them. And they will bear witness against themselves that they were disbelievers.

He created man (Adam) from sounding clay like the clay of pottery.

And the jinns did He create from a smokeless flame of fire.

Then which of the Blessings of your Lord will you both (jinns and men) deny?

Indeed, Surah 72 is named Surah al-Jinn, and begins with Allah informing our beloved Prophet (sa) that some jinns were listening to his message:

Say (O Muhammad (sa)): “It has been revealed to me that a group of jinns listened (to this Qur’an). They said: ‘Verily! We have heard a wonderful Recital!

Similarly, encounters with jinns are mentioned in the Hadith and Seerah. For example, its states in Bukhari, the Book of Prayer:

It is related from Abu Hurayra that the Prophet, may Allah bless him and grant him peace, said, “Last night an ‘Ifrit of the jinn suddenly appeared before me – or words to that effect – attempting to interrupt my prayer but Allah gave me power over him. I wanted to tie him to one of the pillars of the mosque so that you could all see him in the morning, but I remembered the words of my brother Sulayman, ‘O Allah, give me a kingdom which no one after me will have!‘.”

It is mentioned in many Seerahs, for example, that when the polytheist leaders of Makkah were planning how to kill the Prophet (sa) before the Hijrah, Iblis (Shaytan) in the disguise of an elderly man listened to the debate and endorsed their ultimate plan.

From what I have learned from various scholars and reading books over the years, it is important to know of the existence of the jinn, how the disobedient jinn try to influence us, and what is mentioned about them in the Qur’an and Hadith. But to delve deeply into matters about the jinn that do not concern us goes beyond what we need to know and potentially leads us into dangerous territory. Thus, learning about the jinn should be part of our Islamic studies but should not arouse undue fascination. Jinn are a part of the unseen world, part of Allah’s creation, and like us and all other creation, their existence totally dependent on Allah and His Mercy and Will. The existence of the jinn is a simple reality. And someday, insha’Allah, I will feel comfortable sharing this knowledge with my most resistant relatives.

Eight Alternatives to the ScreensThe Best Stories to Tell