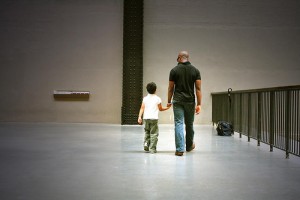 Our children are literally our investment in this world for the next, as the Prophet (sa) said: “When a man dies, all his good deeds come to an end except for three: ongoing charity, beneficial knowledge, and righteous offspring who will pray for him.” (Muslim)

The world is now changing. Due to globalization, our children are now exposed to all sorts of ideas and values, many of which do not conform with our Islamic sensibilities and which desensitize them to the widespread vices in the society. In these times of trials and fitnah, we need to make sure that we inculcate in our sons the ability to think and make the correct choices. We need to raise leaders, not sheep following the herd of the latest trends.

Here are eight things that Muslim parents must teach their sons to help them emulate the perfect model of our beloved Prophet Muhammad (may the peace and blessings of Allah be upon him)!

1- You are the shepherd of your flock

These words of our Prophet (sa) need to be etched in our sons’ memories, especially in this day and age when men are absent from their families, and the degeneration of the institution of the family in the West is being glamourized. Teach your sons that a shepherd takes care of his flock and protects them from not only hunger and thirst but also the wolves out there to get them. Our sons should be the protectors and saviours of their family and society. Explain to your sons that even though hanging out with friends, being involved in propagating Islam, and spending time at work is encouraged, this does not absolve them of the responsibility of making sure that their family comes first.

In the name of feminism, gender equality, and the live-and-let-live banner, men have been stripped of their most important value: their ghayrah or sense of honour. Out of their fear of being stigmatized as jealous, intolerant, and backward, men have lost their innate sense of honour to protect their women, children, family, and their rights. This does not mean that we raise our sons to be jealous, over-protective, intolerant brothers and husbands; we need them to be men who are intolerant of the practices that lead their family away from the deen (religion) of Allah yet patient and wise in guiding their loved ones. Just as you teach your daughters, teach your sons too the importance of the Hijab and how it liberates the Muslim women from oppression and exploitation and not the other way round. Let your sons be the voice and the force that helps the Muslim woman walk about in her Hijab and Jilbab without the fear of being persecuted.

3- Modesty is not for women only

Do not let your sons grow up with the notion that only women need to be modest. Teach them that modesty is as much for men as it is for women and modesty being half of faith applies to all Muslims. Help them realize that looking good and sporting the latest trends is great as long as it does not lead them to feelings of superiority, imitation of the disbelievers, or extravagance. Inculcate in them a love for simplicity, for growing their beards like the Prophet (sa) advised, and a love for being clean and neat.

Teach your sons that the more respect they give, the more they will be respected. Teach them to be good listeners, as a good leader is one who accepts good counsel and opinions of others as we see in the example of the Prophet (sa). Teach them to listen with the intent to understand, not with the intent to reply or argue. And last, but not the least, teach them early on to be caring and kind to their mother and sisters, so that they are gentle, loving husbands and fathers when they grow up.

5- A real man helps around the house

Teach your sons from a very young age to help around the house and participate in chores as much as their sisters, so that they grow up to be men like the Prophet (sa), who would mend his own shoes, wash his own clothes, and help around the house. The Prophet (sa) is the model of excellence and our sons need to be taught his Seerah (biography) in detail so that they emulate him in every manner, expecting the reward from Allah for following his footsteps.

6- Less of halal is better than more of haram

Teach your sons not to measure their success on the yardstick of this world. Inculcate in them the understanding that it is better to earn less through halaal permissible ways, than to earn more through illegal or dodgy means. Make them understand that if earning halal gives them less in this world, the recompense in the Hereafter will be beyond their wildest imaginations.

Though we need to let our children learn how to make their own relationships and function in society independently, it is the responsibility of the Muslim parent to give their children the tools to help them choose the right friends.

Prophet Muhammad (sa) said: “A person is likely to follow the faith of his friend, so look whom you befriend.” (at-Tirmidhi; reliable) Teach your children to befriend those who remind them of Allah and don’t lead them to things that are against the teachings of the Prophet (sa).  Explain to them the analogy of a good friend being akin to a perfume seller who leaves one with a good smell versus a bad friend who, like the blacksmith, will either burn you or leave you with a bad smell. (Muslim)

In today’s day and age, when all one can see is an obsession for ‘comic book superheroes,’ capture your sons’ imaginations with tales of Khalid bin Walid who was more skilled than the best of the Jedi Knights; acquaint them with the powers granted to Sulayman (as) which surpassed the powers of all the comic book heroes put together; entrance them with stories of the strength of Umar’s (ra) faith which cannot be rivalled by any character of someone’s imagination. Teach your boys to look up to the prophets of Allah, Prophet Muhammad (sa), his Companions, and the righteous predecessors – the real superheroes – by telling them their stories and creating in them the urge to emulate them and follow in their footsteps.