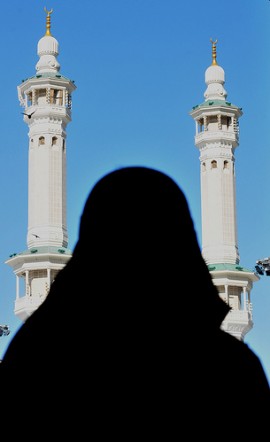 In the midst of burning

of the event of sacrifice

and proof of the Qur’anic

authenticity and its prophecy

about the Prophet’s (PBUH) eternal success!!!

Lord of the Universe

For a spiritual feeling of

What a wisdom of the Almighty Allah (SWT)

that He guides mankind through reviving

the tradition of over four thousand years

and evidence of completion of His mission

by His beloved Prophet (PBUH)!!

The largest pilgrimage in the world

of sacrifices, equally stay in the tents,

win over their “Nafs”

equally trying for entry into “Jannah”

equally trying to get rid of “iblees”

equally repenting for their sins

equally making duas for themselves and their clan

and finally gives the pilgrims a “rebirth”-

a pure, sinless and rejuvenated life!!-Subhanallah!!!

What a wisdom of Allah (SWT) to

place the “Kabah” nearly at the

centre of the world! thereby

indirectly indicating that Islam is the

true religion and everybody should

move towards it at anyone point!!

The Islamic calendar begins and

is it not amazing?

To be precise, it is a reminder for us that

Muslims should surrender to the will of Allah (SWT),

have abundant love for Him and His Prophets, and

adapt the sunnahs of the Prophets

to be happy and prosperous here and in the hereafter.

So, Oh! Brothers and Sisters-in-Islam!!

sincerity and do not make the Hajj

rather sincerely believe and perform Hajj

the way our beloved Prophet (PBUH) performed it,

the way the Sahabahs performed it

the way the righteous people performed it

since it is, undoubtedly, the completion

of  religious obligations and surely

the gateway of Jannah and ultimate success!!!

Non-Toy Gift Ideas for the Muslim Child – Part 1Winter: A Blessing for the Believers