‘Hurry up and pray, you donkey!’ 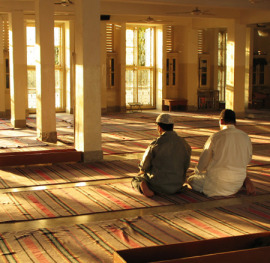 Often when we see someone erring, we flare up and lose our temper while really wanting to advice the person. The consequences could be bad, leaving us with total opposite results. Dr. Muhammad Al-Arifi mentions a beautiful story in his book Enjoy Your Life

ABDULLAH was an energetic person but lacking in certain skills. One day, he left his home to pray Dhuhr in the mosque. It was his zeal for the prayer and respect for his religion which brought him out to pray. He was walking fast in order to reach the mosque before the Iqamah was given. On his way, he passed by a date-palm tree on top of which there was a man in uniform, working on the tree. Abdullah got surprised and thought, “Who is this man that does not care about the prayer! It is as if he didn’t even hear the Adhan, or doesn’t care about the Iqamah, which is about to be called!”

He shouted in anger, “Get down and pray!”

He said, again, “Hurry up and pray, you donkey!”

The man screamed,”You called me a donkey?!” He then took a branch of the tree and descended in order to hit him over the head with it! ‘Abdullah hid his face with his headscarf so the man wouldn’t recognize him and went on to the mosque. The man descended from the tree in anger, went to his house, prayed and rested for a while. He then returned to the tree to finish his job. Then ‘Asr time came and ‘Abdullah went to the mosque again. On his way he passed by the same tree and noticed the same man working. He decided to change his method altogether and said,’As-salamu ‘alaykum! How are you?”

The man replied, “Al-Hamdulillah, I am fine!”

He said, “Give me some good news. How are the dates this year?”

‘Abdullah said, “May Allah give you success and provision, make your life easy for you, and not deprive you of the reward for your work!” The man was overjoyed at hearing this supplication and said Ameen to the prayer.

‘Abdullah then said, “It seems that you are so preoccupied with work that perhaps you didn’t notice the Adhan for ‘Asr prayer. The Adhan has been called and the Iqamah is about to be given. Perhaps you should get down, relax a little and get ready for prayer.After the prayer you can get on with your work again. May Allah keep you healthy.”

He then turned to ‘Abdullah, shook his hand warmly and said, “I would like to thank you for your excellent manners. As for the one who passed by me at Dhuhr time, I wish I could see him and show him who the real donkey is!”

Get Enjoy Your Life print edition and ebook edition at IIPH.com