Four Simple Deeds for the Day of Arafah 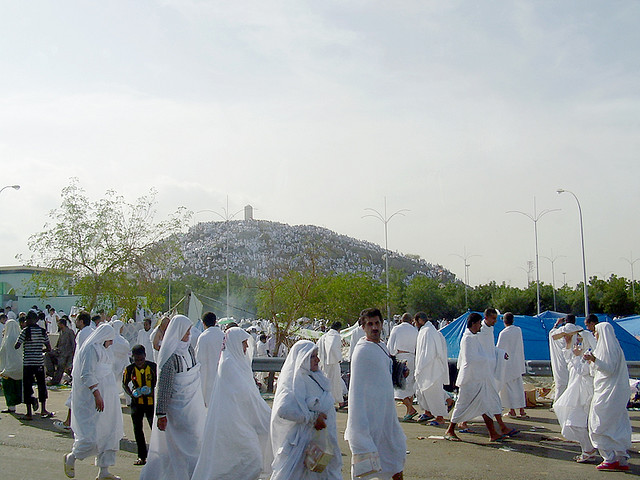 They were sleeping, sitting idly, and engaging in vain talk. I so wished I could make them realize what an important day it was! It was the Day of Arafah, and they were in the plain of Arafat. Today, they had a chance to be among those about whom Allah (swt) boasts among his angels. Today, they had a chance to save their necks from the blazing heat of hellfire. This virtue of the Day of Arafah is not restricted to the pilgrims; it is also for those who are not performing Hajj.

The Day of Arafah is an exceptional day! On this day, many years ago, we all spread out before Allah and he took from us an important covenant that He is our Lord. We all testified to this. (Ahmad; authenticated by al-Albani). It is the day by which Allah (swt) takes an oath in Surah al-Fajr. It is the day when the greatest blessing of Allah, the religion of Islam, was perfected for us.

A Jewish man came to Umar ibn al-Khattab (ra) while he was the Caliph and said to him: “O chief of the believers! There is a verse in your Book which is read by all of you; had it been revealed to us, we would have taken that day on which it was revealed as a day of celebration.” Umar asked: “Which is that verse?” The Jew replied: “This day I have perfected your religion for you, completed My favour upon you, and have chosen for you Islam as your religion.” (Surah al-Maidah 5:3) Umar replied: “No doubt, we know when and where this verse was revealed to the Prophet (sa). It was Friday, and the Prophet (sa) was standing at Arafat.” (Bukhari)

How can we be productive and gain maximum benefit from the Day of Arafah?  Following are some simple deeds that were recommended by the Prophet (sa):

Fasting on the Day of Arafah is like running a super powerful eraser through our book of deeds. The Messenger of Allah (sa) was once asked about fasting on this day, and he replied: “It expiates the sins of the preceding year and the coming year.” (Muslim)

Plan with your family to fast on this day and set a reminder for it lest you forget and miss this opportunity.

Let’s step back in time and see what Prophet Muhammad (sa) did on the Day of Arafah. He stood in the valley from noon till sunset, with his hands raised, remembering Allah and supplicating to Him. The dua (supplication) made on this day is the best of duas as indicated by this hadith: “The best dua is dua on the Day of Arafah, and the best thing that I or the prophets before me have said is: Lâ ilâha illâ Allâh wahdahu lâ shareeka lah, lahul-mulku wa lahul-hamdu wa huwa ‘alâ kulli shay’in qadeer. (There is no god but Allah, alone, with no partner or associate; His is the dominion, to Him is all praise, and He has power over all things).” (at-Tirmidhi; authenticated by al-Albani)

If you are performing Hajj, make sure that you’ve made a list of all the supplications that you wish to make during this special journey. In this list, write supplications for yourself, your here and hereafter, your family, relatives, friends, and the entire Ummah separately. This list will come in handy during Tawaf (circumambulation of Kaaba) and also on this day on which all you have to do is make duas!

Those who are not performing Hajj should also make a lot of supplication on the Day of Arafah as the virtue of this day is general and everyone can avail it.

Aishah (rah) reported Allah’s Messenger (sa) as saying: “There is no day when Allah sets free more servants from hell than the Day of Arafah. He draws near and then praises them to the angels, saying: What do they want?” (Muslim)

In these hours, repent to Allah, beg for His forgiveness, and vow to turn over a new leaf. Also, as a practical tip to get closer to Allah, you can decide on some vice that you will leave for the sake of Allah and some virtue that you will adopt for His sake.

While sitting, standing, working, and commuting, keep your tongue occupied with phrases of remembrance. This is something that each one of us can easily do. The ten days of Dhul-Hijjah and the Day of Arafah are blessed days, with special significance in the sight of Allah.

Prophet Muhammad (sa) said: “No days are greater in the sight of Allah in which good deeds are more beloved to Him than these ten days, so recite a great deal of tahleel (la ilaha illâ Allah), takbeer (Allahu Akbar), and tahmeed (Alhamdulillah) during them.” (Ahmad; graded authentic by Ahmad Shakir)

Let’s aim to take full advantage of these blessed hours so that we may add to our book of good deeds and consequently add weight to our balance on the Day of Resurrection.