Six Ways to Receive Blessings from the Angels 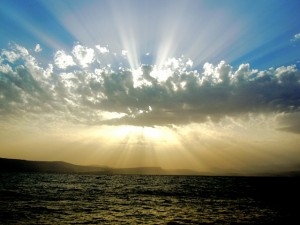 Imagine yourself in a state of grief and confusion. Your close friends come and tell you how they remember you in prayers every day and mention you in front of Allah in the darkness of the nights. Won’t you love them for it and feel that you have a special relationship with them? Won’t this spark a flicker of hope and happiness in your heart?

We all love it when someone supplicates for us. Do you know that the innumerable angels roaming around in the universe also make Dua (supplication) for the believers: you and me? One of my favourite passages in the Quran is the one in Surah Ghafir, which mentions some of these angels.

“Those [angels] who carry the Throne and those around it exalt [Allah] with praise of their Lord and believe in Him and ask forgiveness for those who have believed, [saying]: Our Lord, You have encompassed all things in mercy and knowledge, so forgive those who have repented and followed Your way and protect them from the punishment of Hellfire. Our Lord, and admit them to gardens of perpetual residence which You have promised them and whoever was righteous among their fathers, their spouses and their offspring. Indeed, it is You who is the Exalted in Might, the Wise. And protect them from the evil consequences [of their deeds]. And he whom You protect from evil consequences that Day – You will have given him mercy. And that is the great attainment.” (Surah Ghafir 40: 7-9)

Many other verses and hadiths depict the strong relationship between the angels and believers. They are our allies and compassionate friends.

Following are some of the ways to become a recipient of their prayers and blessings:

1. Sleeping in a state of ablution

The angels, as informed by Prophet Muhammad (sa), pray for a person who sleeps in a state of purity, that is, ablution. He (sa) said: “Whoever goes to sleep in a state of purity will have an angel over his head, and he will not awaken until the angel says: O Allah, forgive your servant for he has slept with ablution.” (Ibn Hibban; authenticated by al-Albani)

2. Spending in the way of Allah

Allah (swt) grants blessings to those who spend in His cause whether they spend wealth, time, or skills. Abu Hurairah (ra) reported Allah’s Messenger (sa) as saying: “Every day, when the servants (of Allah) get up in the morning, they are visited by two angels. One of them says: O Allah, give more to the one who spends (for the sake of Allah); the other says: O Allah, bring destruction to the one who withholds.” (Muslim)

3. Spending time in the mosque

Mosques are the most beloved places in the sight of Allah. Allah loves those who frequent the mosques and enliven it by their constant presence, recitation of Quran, and remembrance of Allah. Those who sit and wait between two prayers or remain seated after they have prayed are prayed on by the angels.

The Prophet (sa) said: “The angels keep on asking for Allah’s blessing and forgiveness for anyone of you as long as he is at his praying place and does not pass wind. The angels say: O Allah! Forgive him and be merciful to him. Each one of you is (considered to be) in prayer as long as he is waiting for the prayer and nothing but the prayer detains him from going to his family.” (Bukhari)

4. Sending peace on the Prophet (sa)

It is one of the rights of Prophet Muhammad (sa) that we send peace and blessings on him. Moreover, this is a very rewarding act; the angels and Jibreel (as) send blessings on the person who sends peace on the Prophet (sa).

One day Prophet Muhammad (sa) came to his Companions with evident signs of happiness on his face. He said that Jibreel came to him and said: “Would it not please you, O Muhammad, to know that I will send ten blessings on anyone among your Ummah who will send blessings upon you? I will send ten greetings of peace to anyone among your Ummah who sends greetings of peace to you.” (an-Nasa’i; reliable)

We do visit our dear ones when they are unwell out of courtesy and kindness. However, if we become aware of the virtue of doing this, we would do this with more zeal and enthusiasm. It was narrated that the Messenger of Allah (sa) once said: ‘Whoever comes to his Muslim brother and visits him (when he is sick) is walking among the harvest of Paradise until he sits down; when he sits down, he is covered with mercy. If it is morning, seventy thousand angels will send blessing upon him until evening, and if it is evening, seventy thousand angels will send blessing upon him until morning.” (Ibn Majah; sound)

6. The teacher of goodness

The angels pray for those who teach goodness and knowledge to the people. Prophet Muhammad (sa) said: “The superiority of the scholar over the worshiper is like my superiority over the least of you.” Then the Messenger of Allah (sa) said: “Indeed, Allah, His angels, and the inhabitants of the heavens and the earths – even the ant in its hole and the fish – send blessings upon the one who teaches the people to do good.” (at-Tirmidhi; sound)

The Three-Day Rule: Today is the Most ImportantEight Things to Teach Your Muslim Sons