Reflect over the Qur’an Through Basic Science 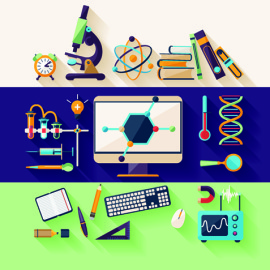 What types of books do you have in your family library? Apart from the Qur’an, books of Hadith, and other books for personal spiritual development, I suggest a section containing scientific books. Experience has shown me that having access to basic scientific materials can help a person gain a deeper appreciation of the Qur’an and Allah’s Wisdom and Mercy.

Allah (swt) specifically directs us in the Qur’an to study His signs in nature and in ourselves:

“We will show them Our Signs in the universe, and in their ownselves, until it becomes manifest to them that this (the Qur’an) is the truth. Is it not sufficient in regard to your Lord that He is a Witness over all things?” (Qur’an 41: 53)

Indeed, Allah’s signs are mentioned throughout the Qur’an. Look at Soorat ar-Room, for example:

In these and other verses, Allah (swt) gives us specific signs that we are directed to ponder, and He encourages us to look for meanings in all of creation. Below is another example:

“And it is He who spread the earth and placed therein firmly set mountains and rivers; and from all of the fruits He made therein two mates; He causes the night to cover the day. Indeed in that are signs for a people who give thought.” (Qur’an 13: 3)

To help us understand this verse, we turn elsewhere in the Qur’an. For example, in Soorat an-Naba’ Allah states:

Here Allah (swt) is teaching us about science: geology in particular. We understand that the mountains serve a purpose: to stabilize the earth. If one learns more about geology, however, he or she might discover that it wasn’t until the 1960’s—fourteen centuries after the advent of Islam—that the theory of plate tectonics was developed. Plate tectonics explains that the earth is made up of different moving plates, and the way mountains are formed, and their purpose. This ‘discovery’ of modern science was revealed to us centuries earlier.

Similarly, the Qur’an mentions the stages of embryonic development in several verses (e.g., Qur’an 23: 14). It wasn’t until much later that technology allowed scientists to ‘catch up.’ Throughout the Qur’an, Allah (swt) teaches us about the universe we live in, and indeed many people have converted to Islam because of this.

Celestial bodies such as the sun, moon, and stars are mentioned frequently in the Qur’an (e.g., Qur’an 16: 12). The moon, for instance, has no light of its own; it glows brilliantly because it reflects the sun’s light—an interesting bit of scientific knowledge that most children learn early on. Our beloved Prophet (sa) was often compared to the moon, lighting up this dark world of ignorance and heedlessness just as the moon lights up the night. He was thus the most perfect manifestation or reflection of Allah’s (swt) attributes. Learning the science behind the moon’s light allows us to understand the moon’s symbolism more fully.

All knowledge is found in the Qur’an. However, if we have ready access to basic scientific information we can, perhaps, gain a deeper understanding of some of the verses. If our intention is to understand the Speech of our Creator, reading scientific materials will become an act of worship, helping us to fulfill our Islamic duty to reflect on the Qur’an, the Last Revelation Allah (swt) chose for humankind.

So, Insha’Allah, the next time you pick up a scientific book you will see more than some complicated, undecipherable equations and long words that you cannot spell or even pronounce! You will see a precious resource that may help bring you closer to your Lord.

The more trials you face, the more sins you reduce…Want To Make An Islamic Library? Here’s How!