The Hierarchy of Pursuits 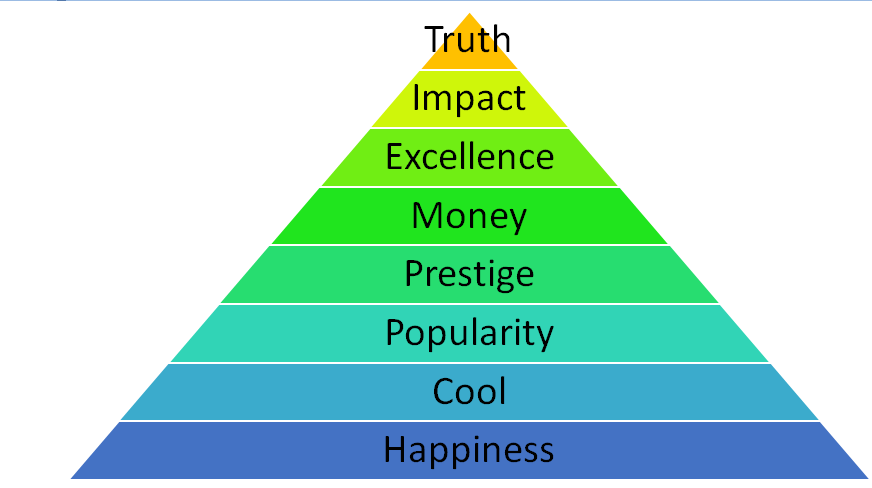 Human beings are always pursuing something or other; that is what drives us into action in the first place. The kind of things pursued vary a lot from person to person – our goals, aspirations, and even our personalities are defined by the things that motivate us and the things that we pursue.

Ustadh Nouman Ali Khan has put forward a hierarchy of pursuits, in which as we go up, the level of hard work required increases and the number of pursuers decreases. Let’s see what these pursuits are from the bottom up.

Each and every human being on this planet, even the most depressed individual, wants to be happy. Why do people commit suicide? Because they have lost all happiness in life and are miserable; since they expect no further happiness, life seems pointless to them. But it’s really easy to find happiness, at least the kind that gives momentary pleasure. Eating a chocolate pastry gives you a fleeting high. Some people drink alcohol and party; others go sky-diving; still others watch a movie while eating popcorn – all in order to be happy. But this kind of happiness isn’t lasting. To get lasting happiness, one needs to stop pursing happiness itself and look higher.

To be honest, I’ve had my share of this, as have most others, in the adolescent years. I so wanted to fit in – it defined the way I dressed, the kinds of movies I watched, the way I talked, and a whole lot of other things. That’s what the Ustadh termed “the pursuit of cool”, and this kind of pursuit obviously makes life pretty shallow. It also goes on to inhibit a person’s true personality and aspirations of the heart.

“You don’t just want to fit in; you want to be the biggest bully out there.”

The hidden seed of desire for fame that we try to keep in check grows into sturdy plants in some people’s hearts. Popularity acts as a kind of drug, and, just as with drugs, the person craves for it more and more. And just as it is with drugs, people who reach the height of addiction realize that there’s a big hollow inside them that they have been trying to hide from themselves using the fake sense of self-esteem that drugs produce.

This is the ultimate extreme for the desire for popularity – you want to show everyone that you’re the best. And so you must have the best car, the most expensive house, the most brilliant kids, the most beautiful spouse, the latest smartphone, and so on. The cars, houses, and smartphones are so important to such people that they define their worth. So imagine what would happen if Allah (swt) chooses to take it all away from them.

Have you seen those workaholics who just love to work all the time, around the clock? They demand an office laptop, so that they can continue to work unimpeded at home, disregarding crying children and miserable spouses. And all this work does pay – they make a whole lot of money. But the more they make, the more they want, because they don’t want the money to buy things, they want it for its own sake.

I plead guilty. Yes, I was one of this type back in school when, after suffering from personal loss, I had immersed myself into studies. The only thing that mattered was excellence in studies because I felt that it was the only thing that I could control in my life.

But I wasn’t as bad as some other high achievers out there. There are those who feel guilty and depressed when they get an A, because they only got 90 per cent and not a hundred.

Pursuing excellence for excellence’s sake is a problem because it can become, like money, a kind of drug that makes you addicted; when you fail in something, as is inevitable, it can make you very miserable. Failing one test might feel like you’re a total failure in everything in life. So, in order to better utilize excellence, we come to Level 2.

These are the top-drawer individuals whom 99% people look at as weirdos. They chuck a high-paying job in order to pursue the job that they want to do and are really good at, the job that will best enable them to make an impact on the world. They have a higher goal, much higher than excelling at something, because to them excellence is a mere tool needed to make an impact.

Nothing matters to them – not money, nor prestige, nor popularity, nor happiness. In fact, money, prestige, popularity, and happiness often pursue them, especially if their pursuit of impact is of a higher level – the top level.

Top Level of Pursuit: Truth, or Impact in the Hereafter

The topmost level, and the most difficult to achieve, is the pursuit of the hereafter. All the prophets and messengers of Allah were on this level. They didn’t just want to get a pass to paradise; they wanted to be among the highest of people and the closest to Allah (swt). And because Allah (swt) put an incredible amount of love and caring towards their people in their hearts, they dedicated their whole lives in calling others towards Him.

This level of impact is not always visible in this world. Take the example of Prophet Nooh (as), who called his people towards Allah for a thousand years and got very little result. And yet, he continued to pursue the truth all this time because he wanted to make an impact in the hereafter.

If you pursue the truth, Allah will impact your efforts in ways you can’t imagine. Prophet Nooh (as), whose story is mentioned in the Quran itself, is now a role model of da’wah to us Muslims.

Some tips on pursuing the truth

Writer’s note: This article is based on a very beneficial lecture (Redefining Life) by one of my all-time favourite teachers Ustadh Nouman Ali Khan. Though I’ve not had the opportunity to meet him, the amount of knowledge and inspiration he has given me through his online lectures is tremendous. May Allah preserve him and enter him into Jannat al-Firdaws (the highest level of paradise).Ameen. The information in this article is presented with his and Bayyinah Institute’s permission.