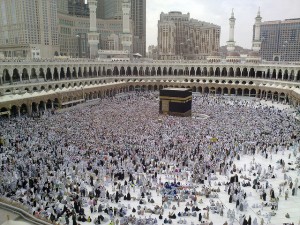 It was the beginning of Hajj, and I couldn’t believe we were finally there. Six months back, I did not have the slightest idea that I would be sitting in a Mina tent this year! Although we had missed the first twenty days of our trip due to last minute complications and a great trial, Allah had invited us, and because he willed it, nothing could stop us.

We were disheartened at being late and being in a constant yes-no situation till the day of departure. I learnt it was quite difficult to stay pleased in whatever Allah wills for you, but indeed His plans have a wisdom we cannot understand.

As we entered into Ihram, men were all dressed in white, reminding of the shroud to be worn upon departure towards Allah. People were chanting the Talbiyah (Labbayk Allahumma Labbayk), some in loud voices and some murmuring under their breath. They were all responding to the call that Allah (swt) had ordered Ibrahim (as) to make hundreds of years ago.

We were reiterating our faith in Allah; that we will respond to every call of Yours; we worship and prioritize none other but You. You are the centre of our lives. Laka wal mulk, for You is the dominion in this world and on me. You are the Sovereign, the only One worthy of complete obedience and surrender. How I wish we would all say it with our hearts along with the tongue!

As we boarded the bus for Mina, there was excitement and joy mixed with a little fear; will I be able to do everything properly? And then, why these tent and why this ground out of all places? Because Allah chooses what he wills! He ordered us to leave the blessed city of Makkah and so we did; this was a reminder for us to honour the call of Allah throughout our lives.

Alhumdulillah, the night before, my sisters and I got the opportunity to read about the soul and spirit of Hajj, and we were mentally prepared for any inconveniences. The test came soon in form of a little commotion in the tent. Some brothers came and informed that the tent was actually assigned to them.

The whole issue was solved with the in-charges. However, some women started complaining because now the space was reduced and it was hot. A few sisters calmed everyone down by reading together and discussing the whole spirit of Hajj.

Advice: Be reminded that Hajj is not your vacation trip; it is the jihad of women for a reason! Inconveniences are bound to come! Allah will test you; are you really willing to pay any price for His pleasure? Indeed you are the guests of Allah! And every test will come with shedding of misdeeds.

Today was the day of Arafah, the core and crux of Hajj! It’s a day that must not be wasted in lazing around and engaging in vain chatter. Because of having to stay up at night, I slept in first part of the day to be fresh in order to pray and supplicate after Dhuhr. This was the time to ask all I wanted: the pleasure of Allah, salvation from hellfire, guidance to the straight path, and the best in both the worlds.

I had always imagined Arafat to be an open ground with Jabal-e-Rehmat being visible, but to my surprise there were tents there too (although anyone wishing to go to Jabal-e-Rehmat can do so). What mattered was to remember Allah and pour the heart to Him, seeking His mercy and forgiveness.

The Messenger of Allah (sa) said: “There is no day on which Allah sets free more slaves from hell than He does on the Day of Arafah.” (Muslim)

We got a bus for Muzdalifah very late after Maghrib but soon reached there. Subhan’Allah! Had I ever imagined sleeping on a highway with buses shrieking past? But that short sleep was so honeyed and so is the Sunnah of Rasulullah (sa) to sleep that night.

After praying Fajr, the crowds started marching towards Mina. My grandmother used to say, ‘it is a storm of heads’ and so it was! It strongly reminded me of the Day of Judgement and the reckoning. I was just a ‘head’ among all these tiny heads. ‘Where do I stand among all in the sight of Allah: among the beloved or the wrongdoers?’ I thought.

Everyone was rushing to stone the Jamarat. We waited in our tents till the rush had subsided a little and then went for the stoning, praying for ease. I was charmed by the rhythm of stones being pelted that could be heard from afar. And with the help of Allah this phase of Hajj passed by very smoothly.

The sacrifice was made, and then it was time to get out of Ihram. We always hear about the washrooms being dirty with water and litter, and so they were. But with so many people, all in a hurry, using it at the same time, this is bound to happen. And Alhumdulillah, we do have a positive side; some people made use of the vipers presents there and took it upon themselves to clean as they waited.

Now for a long walk to Makkah and the Tawaf-e-Ifadah. It took us one and a half hour to reach there on foot. Allah’s wisdom is in everything; our sacrifice had been made just before Maghrib so we left after it and saw en route that all the people were returning from Makkah. The Kaaba wasn’t as crowded as it had been a few hours back, and we were able to make the Tawaf very easily and return before Fajr.

After praying Fajr, we collapsed into bed. We stoned the three Jamarat in the afternoon, and then we were free to rest, recite the Quran, and engage with our Hajj companions, discussing matters related to Deen and ways to grow in faith.

Today was the last day of Hajj for us. We were to leave Mina and the tent, which shall albeit stay engraved in my mind forever! In the afternoon, we performed the stoning of the three Jamarat and left Mina at Asr time. Our Hajj was completed, Alhumdulillah! May Allah grant us all an accepted Hajj (Hajj Mabroor). Ameen!