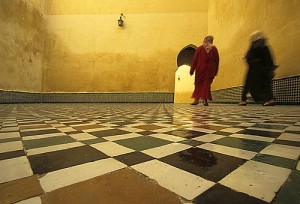 For the last several years, prior to Ramadan I plan an ibadah (worship) schedule for the blessed month. To help in the planning, I have a Ramadan folder, consisting of articles, hadiths, advice from scholars, etc., about what worship is best to do. After Ramadan, I carefully file my schedule away in the Ramadan folder for about 10 months until I bring it out again to use as a basis for planning my new schedule for the upcoming Ramadan. This year something occurred to me: why not have an ibadah schedule for every day—a written down schedule like I do in Ramadan so I won’t forget anything I want to accomplish and I am more able to hold myself accountable? I think we all have a mental schedule that we revisit silently to ourselves during the day: Need to read the Qur’an, want to do 100 astaghfirullahs, can read some Seerah after Asr… . But for me, at least, a written schedule is working much better. A few words of caution though:

1. I have to continually remind myself of this hadith:

Do good deeds properly, sincerely and moderately and know that your deeds will not make you enter Paradise, and that the most beloved deed to Allah is the most regular and constant even if it were little. (Sahih al-Bukhari 6464, Book 81, Hadith 53)

I can’t possibly accomplish all the ibadah that I would like to do—and think I really need to do—and have a normal life. When I read a warning in the Qur’an or hadith, I think it applies to me; when I read a hadith describing dhikr or other supererogatory act of worship that will benefit my Afterlife, I think I should do it; when I learn a du’a (supplication), I think I could benefit from making that supplication. What often happens is that I take on too much, end up stopping what I have started, and feeling the worse for it. I have learned over the years that it is best that I start moderately and build up to my goals.

2. Make a schedule that works for you

I like a very detailed schedule (see partial schedule below) that includes such things as listing the du’a to make after wudu (ablution before prayer) and 3 Astaghfirullahs (asking for forgiveness) after prayer, which makes for a long schedule. My schedule now is 5 pages long, but it could be much shorter. I like the detail, but others might find the length of such a schedule daunting. Everybody knows their own personality and what will work for them. One size does not fit all.

3. Test your schedule out before committing to it

Whatever you begin, you want to continue, insha’Allaah. A sobering hadith is the one below, which reminds us of that commitment:

My father got me married to a lady of a noble family, and often used to ask my wife about me, and she used to reply, “What a wonderful man he is! He never comes to my bed, nor has he approached me since he married me.”

When this state continued for a long period, my father told the story to the Prophet (sa) who said to my father, “Let me meet him.”

He asked, “How long does it take you to finish the recitation of the whole Qur’an?”

I replied, “I finish it every night.”

On that he said, “Fast for three days every month and recite the Qur’an (and finish it) in one month.”

I said, “But I have power to do more than that.”

He said, “Then fast for three days per week.”

I said, “I have the power to do more than that.”

He said, “Fast the most superior type of fasting, (that is, the fasting of (Prophet) David who used to fast every alternate day; and finish the recitation of the whole Qur’an in seven days.”

I wish I had accepted the permission of Allah’s Messenger (saas) as I have become a weak old man.

It is said that Abdullah used to recite one-seventh of the Qur’an during the daytime to some of his family members, for he used to check his memorization of what he would recite at night during the daytime so that it would be easier for him to read at night. And whenever he wanted to gain some strength, he used to give up fasting for some days and count those days to fast for a similar period, for he disliked to leave those things which he used to do during the lifetime of the Prophet (saas).

Below is my schedule, in part—the cells are partially filled out and it refers to only the Dhuhr salah:

The different rows in my schedule include such times as: “After waking”, “Between Asr & Maghrib”, “Before sleep”. As you plan out your schedule, what rows you will need will become obvious.

My intention and aspirations are to follow the Sunnah of our beloved Prophet (saas) and remember Allaah (swt) during the day as much as I can. Planning an ibadah schedule helps me to do this and insha’Allaah, is an act of worship in itself.

Samia Mair is the author of five children’s books, the most recent Zak and His Good Intentions (2014). She is a Staff Writer for SISTERS Magazine and Discover, The magazine for curious Muslim kids and has published in magazines, books, anthologies, scientific journals, and elsewhere. She is currently working two sequels and a historical novel.