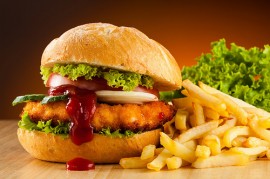 Have you ever made a hefty resolution where you vowed to yourself to lose 20 pounds within a year? This year, it is going to happen, you resolve. The first week is spent carefully counting calories and eating only what is prescribed in diet X and what happens when weekend arrives? You are so exhausted from all that calorie counting that the first chance you get, you end up binge eating.

The above mentioned scenario is actually true for a large number of people. In the US alone, eating disorders are a daily struggle for 10 million females and 1 million males [1]. What went wrong with your resolution? After all, isn’t it good to have a healthy body weight?

It is. But the way to go about it is not by following a strict diet and depriving yourself completely of the things you are most used to eating. Studies suggest that within 5 years, dieters tend to gain all that lost weight right back [2].

As Muslims, our source of guidance is Islam. Our religion gives very clear guidelines about every aspect of life, including eating. We have authentic sources of guidance regarding the etiquettes of eating, and one of its aspects is the amount of food one should eat. Islam highly encourages eating in moderation. Ibn Umar reported that the Prophet (sa) said: “The unbeliever eats with seven intestines, and the believer eats with one intestine.” (Muslim)

The Prophet (sa) also said: “The son of Adam does not fill any vessel worse than his stomach. It is sufficient for the son of Adam to eat a few morsels to keep him alive. If he must fill it, then one-third is for his food, one-third for his drink, and one-third for air.” (at-Tirmidhi; sound)

Why eat in moderation?

There are several other reasons (from an Islamic point of view) why we should never eat more than absolutely necessary. For example, in the Noble Qur’an, Allah (st) mentions:

This verse instructs Muslims to eat and drink whatever Allah has provided for them but they should not commit excesses, and that includes eating too much or too little. The correct way is to eat a balanced diet and stop before one gets too full.

So if we want to increase our iman, get closer to Allah the Almighty and remain energetic for voluntary acts of worship, eating moderately should be part of our lives.

In addition to this, there are also scientific reasons for eating in moderation. Recent studies have found that those who eat in moderation tend to have better memory than those who tend to eat till they are full to the brim [4]. Also, if you restrict certain foods from your diet, you will crave them more. Anybody suffering from diabetes will testify to this. As soon as you include everything in your diet (yes, that chocolate chip cookie too which you were avoiding like the plague), and plan to eat in small portions, you will notice that unhealthy snacks will no longer appear so alluring. You will not be tempted to binge eat that whole bag of cookies because now, you just had one. This is the way most human brains work.

If we remember the Islamic guidelines and the health benefits, there is no reason why we will not make healthy lifestyle choices, including eating in moderation.

Unaiza Ahsan is a graduate student at Georgia Tech

Unaiza Ahsan is a Computer Science graduate student at Georgia Institute of Technology.

Positive Ways to Correct OthersHow can we achieve supreme victory?